Nigerian Tobi Amusan displayed incredible 100m hurdles runs on the final day of the 2022 world athletics championships in Oregon on Sunday to win the gold medal.

The Nigeria 100m huddle athlete breaks the women’s 100m hurdles world record after a remarkable semi-final run before going on to win the gold medal in the final.

Amusan who earlier set a new African record with a time of 12.40 in the heats also set a new World record and won the gold medal, in less than two hours in an impressive Oregon showcase.

She returned to track the same evening and won the finals with a stunning wind-aided (+2.5m/s) time of 12.06 seconds.

Her winning time will not count as another world record. However, it is the fastest in history under any weather conditions.

After the event, Amusan talked about how it felt to break the world record, and also winning the ultimate gold medal in as grand finish. 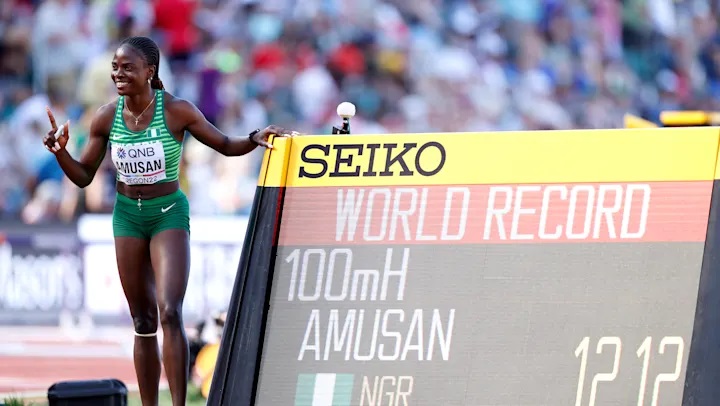 “I honestly believe in my abilities, but I was not expecting to set a new world record”.

“I am thankful. Before the final, I just tried to stay calm and to do my best. I took a deep breath knowing that I have some goal to accomplish and it worked pretty good. I knew it was very fast but not this fast.”

The former 100m hurdles World record holder Kendra Harrison was disqualified after she knocked down a hurdle with hands, which is not allowed to do in this event.