The Sierra Leone side proven to be too tough in defending their title as they humbles South Sudan to win the tournament back-to-back in a thrilling encounter.

A dominant performance was exhibited by the girls, and it was a well-deserved win as Sierra Leone claimed their second title for the second time in 2 years.

The skipper, Zahra Mogul and Semisatu Johnson netted a goal each to cement their victory. Zahra opens the scores in the first half with a superb grounder outside the box to earn Sierra Leone the lead.

She takes the shot when Rojin’s free kick on the edge of the 18 yard box bounce off after the Sudanese defenders failed to clear the ball off their line.

Zahra wasted no time, she struck the ball straight into the goal as the South Sudan goalkeeper watch the ball enters the net. 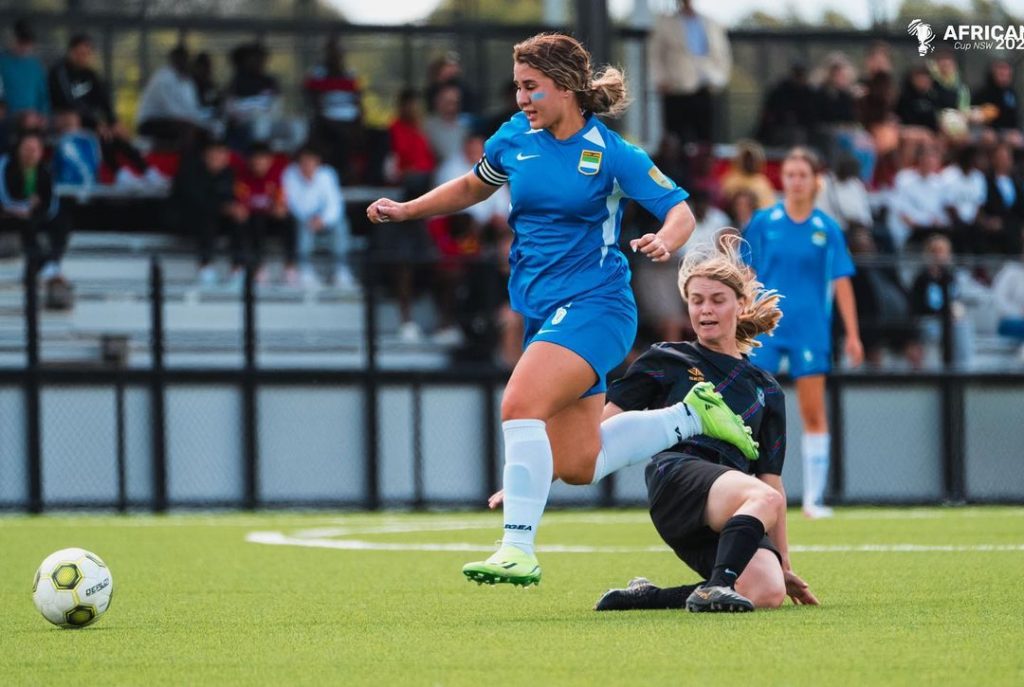 Semisatu who has been one of the strongest force in the Sierra Leone squad netted what many fans described as a magical goal after Mya Callili sent in a fascinating throw that landed just in time for Semi to slot home the winner late in the second half as she powered Sierra Leone to victory.

Appreciating their wonderful performance in retaining the title, the skipper for Sierra Leone Zahra Mogul lauded her teammates for their relentless effort in ensuring they defend the title successfully. She expressed how proud they are for winning the tournament, and promised the fans that the team will return stronger with the hope to defend the trophy again next season.

“I am definitely proud of the effort we put today. It was a great match to play. We run a lot to try and create goals, and we were able to score two goals out of the many chances we have. It was a great match and we are grateful to win the trophy again”, the Skipper for Sierra Leone, Zahra Mogul said after the match.

Coach Ibrahim Sesay’s girls turned up when he needed the best of their abilities to finish off the NSW African tournament as champions of 2022.

Sensational center forward, Rojin Polat was the star of the match as she displayed her qualities playing as an attacker and shadowing as a support player in the midfield.

Rojin was outstanding throughout the match, showcasing her wonderful skills which was a nightmare for the South Sudanese defenders.

Marie, Kaira and Hannah were also influential upfront with their superb skills, putting the South Sudanese under intense pressure, stopping the left and right backs from moving forward.

While Bella, Michaela and Marwa were the rocks of the Sierra Leone defense that helps goalkeeper Genevieve to keep a clean sheet, with Mina, Gloria and Arzu all coming from the bench to contribute in securing the win.

Despite the immense pressure, the South Sudanese side didn’t give up. They kept going and taking their chances to keep their team alive in the match, but their efforts wasn’t enough to break the defense of Sierra Queens.

The Bright Starlets were more active in the second half. They came out very strong looking for an equalizer, but they were unlucky with most of their chances were off target.

The girls were impressed with the turnout of the spectators who cheered on both teams throughout the match. It was a record breaking attendance for the women’s finals.

Many of the spectators are honored to have witnessed the girls played spectacular football. They applauded them for their good work rate and superb control of the ball.

“It’s absolutely encouraging to see girls played like this. They were so fantastic on the ball and I am personally a fan of the player in 10 jersey for Sierra Leone, Rojin Polat. She plays good football. She has wonderful skills and I believed she will play top football in this country”, John said.

The head coach for Sierra Leone, Ibrahim Sesay said it’s an amazing feeling to win the trophy for the second time. Half way in the tournament the team was having scarcity of players, but they manage to sail through.

“Couple of players were unable to turn up for trainings and few others have personal reasons for their unavailability. The situation was well manage, and we try to see how we can overcome those challenging moments”.

“Fortunately, the available players gave their all, they played with their hearts and do all they can to be able to achieve this. It was their hard work that earns us the honor to lift the trophy again”, coach Ibrahim told Mags Tribune Sports.

Skipper, Zahra Mogul of Sierra Leone was named player of the tournaments. It was no mistake giving her the award. According to coach Ibrahim, it was a well-deserved award. “I think she could play at a higher level if she wanted to. She has the skillset to do it”.

“The organizer got it right awarding her player of the tournament. The reason behind giving her the responsibility to captain this team, and I feel that she gravitate to a lot of us in the team and she connect really well with the players here”.

“She was literally the heartbeat to our team and makes the squad operate perfectly. She played by far the best football I have seen from her”, he said.

He cited: “Her positional play was excellent as well as her work rate off the ball, and she controlled the pace of the game. She made some important defensive tackles, she passed the ball well and she scored goals from outside the box”.

“Zahra’s confidence in the middle of the field made the players around her make it easier to play and she made the game look effortless the way she played”.

“She was an excellent leader and captain to this team success. She earned that player of the tournament with her level of play. I will be enforcing commission to you now because you exceeding expectations”, the gaffer added.