Controversial striker, Musa Noah Kamara fondly called Tombo has been suspended from all football competitions across the country over his unsettled football move to Al Ittihad in Libya.

In a statement released by SLFA on Wednesday, they confirmed that they’ve noted with keen interest the numerous controversies surrounding the Leone Stars striker with regards to his recent alleged breach of contract in Libya.

“In a bid to effect sanity into the matter, the FA has taken a decision to temporally suspended Musa Noah “Tombo” Kamara from participating in all SLFA sanctioned and affiliated competitions in Sierra Leone”

“Meanwhile, SLFA is gathering more information on the said matter including details on Musa’s status under the Libyan FA to inform the Federation’s next line of actions”, the FA noted.

The FA has distance itself from the said contract, stating that they didn’t in any way involved in Musa’s transfer to Libya as no ITC was provided.

Al Ittihad SC has been under scrutiny over the past few days with pressure from Musa who threatened to end his life with a knifes in a pre-recorded video he shared on social media, if the club refuses to return him to Sierra Leone. 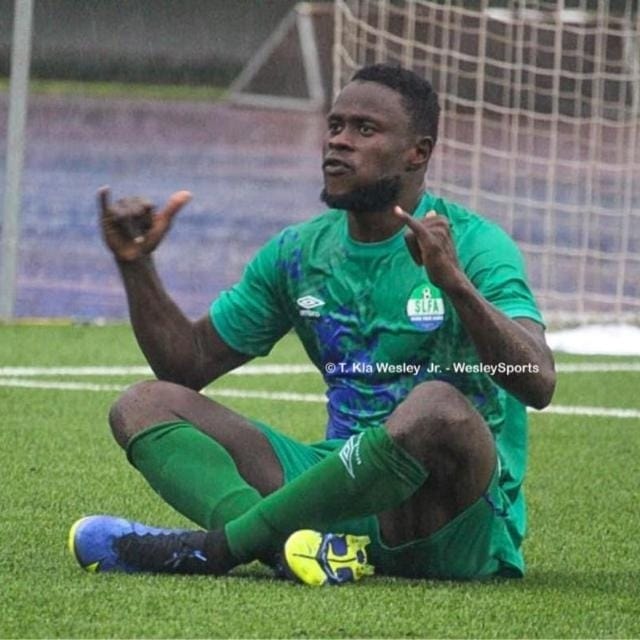 Musa disclosed that he cannot continue with the transfer because he is not comfortable with the environment, asserting since he arrived in Libya, he has been hearing continuous gun shot.

Al Ittihad on the other hand, are claiming ownership of the player who they said have signed a 2-year deal worth $300,000 with a salary package of $15,000 monthly.

According to the Libyan based club, Musa refused to complete  his medical and he has been acting childish and crying all day to return to Freetown since he arrived.

“Musa is our player, we have registered him to play for us and his TMS and CIT has been validated. We granted him a week vacation and we are expecting him to return to Libya next week,” a club representative said.

After a tough week of negotiations for the player to stay in Libya, the club has permitted him to go on a short vacation in Sierra Leone. Musa has already arrived in Freetown and he was seen in one of the local leagues getting ready to play for Seaside Community at the Brima Attugha Stadium. But he was stopped by the organizers not to play due to the FA’s suspension.