John Bangura has been labelled as the best batman for Sierra Leone in the ongoing ICC U19 Africa Division 2 World Cup qualifiers in Abuja, Nigeria following his outstanding performance against the host nation on Monday.

The Kingtom-based cricket prospect has been showered with praises by the Chairman of the Sierra Leone Cricket Association (SLCA), veterans and current senior cricketers and fans for being able to carry the nation on his shoulder to stay long on the crease despite losing the match against Nigeria by 11 runs.

Little John as he is fondly called, earned respect from his opponent for his blistering 87 runs, not out in 118  balls, proven to be one of West Africa’s best batman in the tournament, and as well as demonstrating that he deserves to be the captain of the Sierra Leone national Men’s U19 cricket squad.

His remarkable innings were applauded by the chairman of the Board, Francis Trevor Samura as he capped a remarkable match for himself and his teammates.

“I have never been so impressed with John Bangura’s masterclass batting performance clustered with resilience, patience and unshakeable determination to ensure Sierra Leone wins this tournament like the way I am currently”.

“John has set a new record in the history of this competition. 166 runs in three matches with 3 not outs is a great batting spell which must be commended and other players to follow as an example”, the chairman noted.

The Nigerians won the toss and elected to bat. Paul Pam and Selim Saliu opened the batting order for Nigeria, putting up a fantastic partnership with a total score of 100 runs. Sierra Leone breaks it by dismissing Pam in the 27th over. The Junior Patriot were able to limit the host to 184 runs, all out in 47.4 overs. 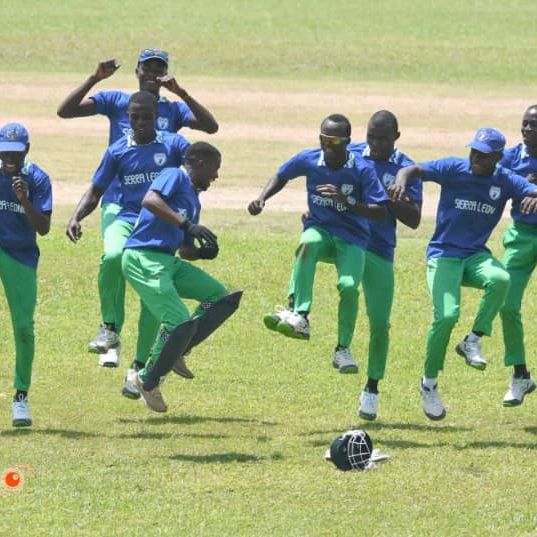 Sierra Leone needed 185 to win but their effort was dampened by Prosper Uswni who claimed 6 wickets and the visitors only scored 173 runs in 41.5 overs.

Acknowledging the reason for the defeat, Chairman Samura stated: “We learned a lot from the Nigeria match. It was ours to lose and we lost it because, apart from young Raymond Coker and George Sesay, no other player could partner with Captain John Bangura to get the match done and dusted largely due to the fact that 13 of the 15 players we have in the team are new to international competition of this magnitude”.

“They are learning and will be even better players as they go along. We dropped three vital catches that led to the Nigerians creating 100 runs partnership as openers. We had the opportunity to win the match but gave it away”.

“What I am sure of, if we go through Kenya on Friday, Nigeria will be beaten and Sierra Leone will be crowned Champions of Division 2,” Samura affirmed.

The Junior Patriots of Sierra Leone will face Kenya, winners of Group A, while Nigeria will be playing against the runners-up in Group A, Malawi in the semi-finals on Friday 7th October 2022.