The midfielder release a statement debunking the rumors, hours after his parent club, FC Johansen writes the FA about him not illegible to play for the Sierra Leone national men’s home based team that is currently camping in Kenema for the CAF CHAN qualifier match against Cape Verde this month.

The letter sparked rumors about the club wanting to destroy the chances of the player representing Sierra Leone because he want to make a move to anther club. Fans are speculating that several clubs are eyeing the player and the FC Johansen management  is not happy about such development.

According to the letter written by FC Johansen, they stated that Bekoe is not a Sierra Leonean citizen by neither naturalization or any other constitutional process. 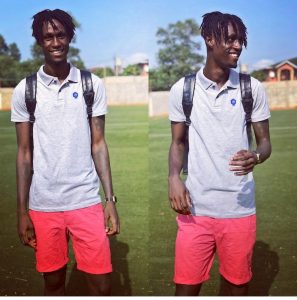 “I write on behalf of the Executive Board of FC Johansen to inform you and the Executive of the Sierra Leone Football Association that it has been brought to the board’s knowledge that FC Johansen midfielder and Ghanaian National Samuel Bekoe has been officially included and is part of the Home Base National B Team currently training and in camp in Kenema ahead of the CHAN Qualifier against Cape Verde in July 2022”.

“The said player is NOT a Sierra Leonean citizen by neither naturalization or any other constitutional process”.

“FCJ permitted Samuel to join the Leone Stars squad in March this year at The Anatalia Cup in Turkey in March this year. The Sierra Leone v Liberia match was a non-Fifa sanctioned match and as such allowed for a specified number of foreign players to feature in national sides”.

constitutional laws of the country, the board has decided to withdraw the said player from the SLFA National training camp with immediate effect. In addition, any allowances given to Samuel Bekoe by SLFA will be instantly refunded to the federation”.

“Samuel’s love for Sierra Leone and football is uncompromising and our prayer is that he will one day live his dream to play for our beloved nation”.

Finally, in light of recent incidents, which have cast a negative, shadow over Sierra Leone football and by extension the country, the club’s decision to withdraw Samuel Bekoe from the National Home Base camp is without bias or personal agenda. It is simply based on the observance of correct procedures”. 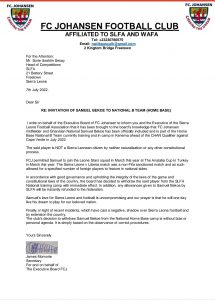 Meanwhile, Bokeo has reassured FC Johansen fans that he will continue to remain a player of the club and that all the speculations about him wanting to leave, should be put to rest.

“Over the past months, rumours and speculations have been circulating within the football family about my association or intention to move to one of the Premier League clubs in Sierra Leone”.

“I wish to make a firm and clear clarification that I am and I will continue to remain a FC Johansen player.

“I was brought into Sierra Leone from Ghana by the owner of FC Johansen Madam Isha Johansen during my years at the club, it has has greatly helped me to improve my skills and abilities . My club is my second family and have been with me through difficult personal times”.

“Currently my focus is on how to further my career through my club FC Johansen and I graciously ask the speculations to be put to rest”. Bekoe noted.