The termination of his contract will be effective from Thursday, September 1, 2022.

This came as a result of the too many controversies surrounding the player’s contract with the club, and the unending social media brouhaha about him.

In his termination letter  released by the club on Tuesday night, they stated the reasons form parted ways with him: “We regret to inform you that we have terminated with us , effective 1 September 2022. We greatly appreciate the relationship we have had with you over the years”.

“However, your failure, refusal and/or neglect to confirm to established standards of good moral character and sportsmanship are reasonably inexcusable”.

“This your whacky attitude has been like a scar on the conscience of our club, and has caused so much reputational damage to both the club and, in particular, our Executive Chairman”.

“We tried the best we could to prevent this, but circumstances before us were unavailable and thus prompted us to sever ties with you”.

“Therefore, you are required to return any club materials and/or equipment in your possession during the period of your contract with us. We expect to receive the same not later than a week upon receipt of this letter”.

“We would like to thank you for your contribution to our club and we wish you all the best for the future”.

Musa finished as the top goals corer of the 2021-22 Sierra Leone Premier League season, and he was an influential player in the Bo Rangers squad. His goal scoring ability helps the Elephant’s win the title for the first time since the history of the club.

Over the past months, the striker has been under serious social media controversies about alleged transfer rumors to join Kaiza Chief in South Africa and  Al Ittihad in Libya.

Musa and his wife claims that, the Bo Rangers management, specifically the Executive Chairman of the Club Babadi Kamara is blocking interest from any club that asked for his availability.

However, the management of the club has denied this allegation, stating that none of the said transfer was legitimate. “There were talks, but the agents didn’t finalized any deal with us. They want to sign him illegally and that was what we were against as a club”, a statement from the club’s chairman. 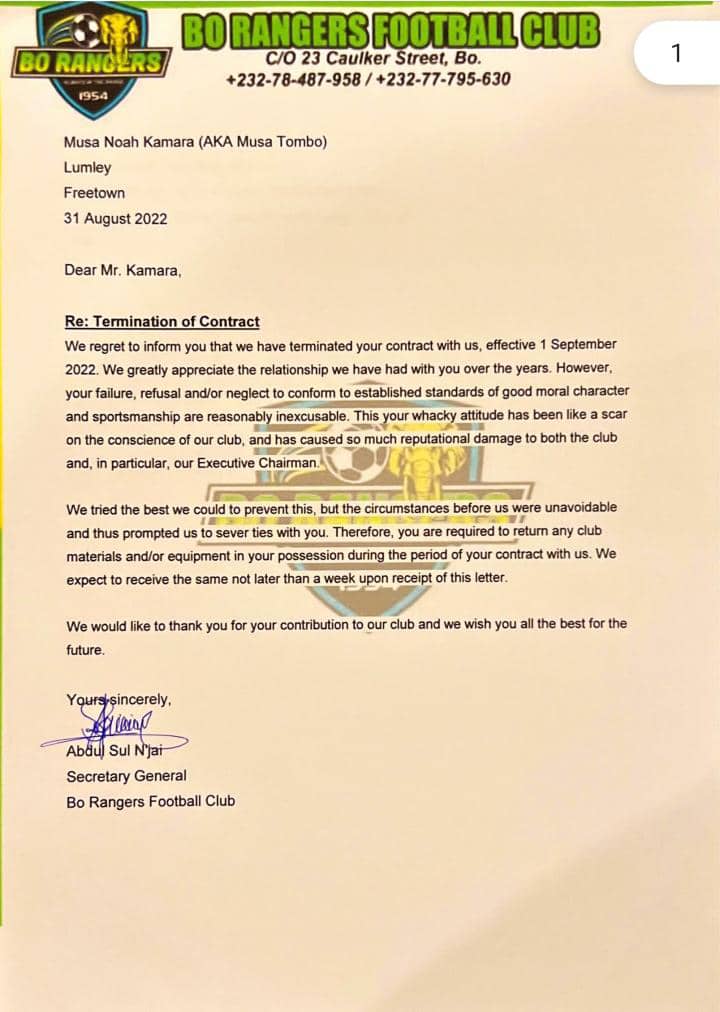